Russell was one of Louisville’s earliest and most desirable neighborhoods, a racially diverse area with a range of housing types from elegant 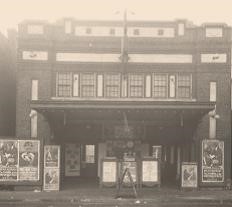 mansions to shotgun cottages. Beginning before the devastating floods of 1937 and 1945 and intensifying afterward, many white residents who had the ability to move to higher ground away from the river did so.

By the 1940’s Russell was known as “Louisville’s Harlem” for its strong African American business presence along Walnut Street (today Muhammad Ali Boulevard) between 6th and 13th Streets. Theaters, restaurants, grocers, professional offices, and nightclubs thrived along this stretch. Notable Russell residents include Albert E. Myzeek (1872-1963), an educator and civil rights activist who led the fight to open the first full-service library for African Americans in the country in Russell, and Lyman T. Johnson (1906-1997), who filed a successful federal lawsuit to become the first African American to gain admission to the University of Kentucky.

Neighborhood decline began after World War II and intensified during misguided urban renewal efforts in the 1960’s that demolished the commercial area along Walnut Street. Beecher Terrace was built in 1941 replacing seven traditional neighborhood blocks, including four along Walnut, with superblock-format public housing.

Today, the Russell neighborhood is 1.4 square miles and well-located within 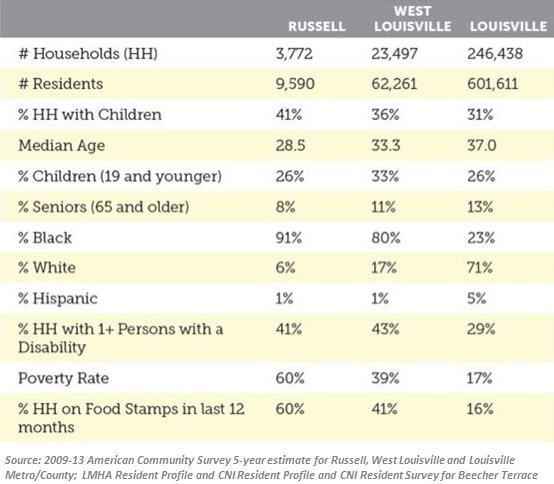 Louisville: it is immediately west of downtown and has easy access to I-64 and I-264 as well as multiple bus transit routes. Its location is an important asset for current residents and a strength to build from when considering strategies for neighborhood improvement.

Russell, with a population of nearly 4,000 households, is one of nine neighborhoods that make up West Louisville. Once a vibrant, thriving, and economically and racially diverse neighborhood, Russell today is largely an African American area with high levels of poverty and disinvestment. But signs of change are everywhere.

Recognizing its importance to the health and vitality of the entire city, the Louisville Metro government recently designated Russell as a priority focus area for concerted efforts to counter decades of disinvestment. New investments both private and public, are evident and the community and its stakeholders have come together to articulate a vision and a plan to build upon this momentum.

While signs of reinvestment are becoming evident in Russell, families who live in the neighborhood still face significant challenges.

Russell has 9,590 residents which represents approximately 15% of the total West Louisville population. Residents are predominantly Black in a Metro where Blacks account for less than a quarter of the population. More Russell households have children than in the city as a whole and the population tends to be younger.

Russell’s poverty rate among households is 3.5 times higher than the general Louisville population, resulting in 60% of households needing food stamps in the preceding year.